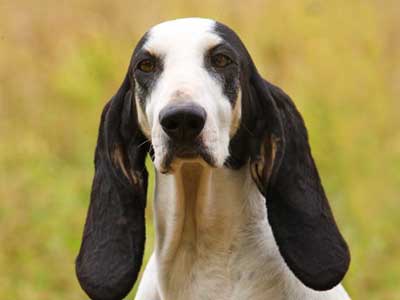 The Ariegeois is a breed of dog that originated in the French province of Ariège around 1912.

Their short coat is predominantly white with some black mottling and some tan patches on the face. They should be thin and tall, with long, slender ears.

Traditionally employed in packs for hunting, this breed is becoming more prevalent within the family household these days.

This transformation from working animal to adored pet almost definitely occurred as a result of their lovable personalities.

However, owners should be warned that the Ariège dog has a high exercise requirement and so requires an expert and patient trainer.

The average Ariegeois will reach the age of ten to twelve. As a relatively young breed, there is insufficient research available about the Ariegeois’s overall health.

However, anecdotal evidence suggests that this breed is predisposed to several conditions:

Hip dysplasia is one of the most frequently seen hereditary disorders in primary care. Throughout the dog’s life, abnormal hip joints create movement difficulties and pain. Numerous treatment methods are available and will vary according to the dog’s age and disease severity.

Luxation of the patella

When a dog’s kneecap does not sit properly, it is said to be luxated. Typically, the luxation will last only a few seconds, during which the dog may skip a few steps. If the injury is severe enough, orthopedic surgery may be the best course of action for the dog’s recovery.

Entropion is the precise term for the inward fold of a dog’s eyelid. This deformed eyelid will surely irritate the surface of the eye and, in difficult situations, may even result in corneal ulcers. Frequently, corrective surgery is recommended to address the incorrect placement.

Ectropion is the polar opposite of entropion – the eyelids fold outwards excessively, failing to provide adequate protection for the eyes. Numerous hound dog breeds have a genetic predisposition to this malformation. As is the case with entropion, a corrective procedure is typically performed once the animal reaches an appropriate age.

Bloat is a medical emergency in which the abdominal cavity dilates. While some cases can be treated medically, surgery will be necessary if the dog’s stomach twists. It is believed that dogs with a deep chest are more prone to developing this illness.

When it comes to the Ariegeois’s short coat, less maintenance is required.

Once a week, a short brushing will eliminate loose fur. This will also aid in the distribution of the dog’s natural oils throughout their coat.

Bathing on a regular basis should be avoided since this will remove vital natural oils. Baths are only necessary following an especially muddy run or exposure to disagreeable stuff like fox feces.

Due to the Ariegeois’s hunting instincts, they are content to pursue scents for hours on end and possess exceptional stamina.

This drive also necessitates a very secure garden or enclosure for the Ariegeois, as they are known to be excellent escape artists when seeking to pursue prey.

They are lightning-fast, and once an Ariegeois has escaped, you are unlikely to see them again until they decide to return.

Housing an Ariegeois in a tiny house or apartment is not a smart choice since they prefer an adequate area to wander and will likely feel frustrated in a confined setting.

While exercising them for an hour or more each day can help alleviate their frustration, most dogs still require more time outdoors and plenty of stimulation through games and activities.

A bored or under-exercised Ariegeois dog is virtually certain to bark frequently. While their musical voice is an asset when hunting, it can become extremely irritating when attempting to sleep at night!

While training an Ariegeois dog to hunt is simple, training them to do anything else may be a tremendous problem. They have a headstrong streak, rarely obeying their trainer’s directions.

Training attempts are also impeded by the Ariegeois’s hypersensitive nose, which is readily distracted by any adjacent odor.

The Ariegeois’s commitment to tracking and hunting can be a double-edged sword. While they are obviously exceptional hunters, their single-minded nature makes convincing them to do anything else tough.

Daily, feed 2.5 to 3 cups of high-quality food to Ariegeois Pointers. It is advisable to spread that out over two meals.

For instance, feed 1.5 cups of food to the dog each morning and night. You may need to change the serving size according to the dog’s age, activity level, and health requirements.

It is critical to choose dog food manufactured with high-quality components. The food should be high in nutrients and low in fillers.

Look for dog foods that are high in protein and low in carbohydrates.

Despite a history of almost solely being employed as a working hound, the Ariegeois’s charming and loving character has resulted in them being utilized as companion animals more frequently in the modern era.

They are often tolerant of youngsters and affectionate toward all members of their family. They are tolerant to strangers and rarely show signs of shyness or suspicion.

These characteristics combine to make the Ariegeois an ineffective guard dog. Their deep bark and alert attitude, on the other hand, make them an excellent watchdog.

The Ariegeois is renowned to form strong bonds with its owners and places a high premium on their direction, wanting to live up to their expectations and gain their respect.

Other animals flourish in the presence of dogs but cannot be trusted with any other species.

Due to their strong prey drive, any cat or small animal in the company of an Ariegeois is in serious danger of being hunted and harassed.

Ariegeois Pointers have short, smooth coats that are easy to groom.

They shed on average, which means you’ll need to vacuum and pick up hair on a regular basis. Maintain the health of their coat and skin by brushing it out with a firm bristles brush.

Ariegeois Pointers are generally thought to be rather straightforward to train. These canines are devoted to their owners and like satisfying them.

This makes them far more trainable than other breeds of dogs. If you employ positive reinforcement exclusively during the training process, the Ariegeois will almost certainly develop excellent listening skills.

Due to their origins as hunting dogs, Ariegeois Pointers are high-energy and require frequent exercise. This dog thrives in rural or country surroundings.

At the absolute least, the dog requires a large yard to run about in. This is not the dog for someone who lives in an apartment or plans to move into one in the near future.

Ariegeois Relationship with Children and Other Pets

Ariegeois are regarded as excellent family dogs. They get along well with humans in general, though they may be a little suspicious of newcomers.

Nevertheless, they are super fun and loving, even around children.

Nonetheless, you should socialize any dog as soon as possible. Early socialization assists the dog in adjusting to family life.

Additionally, never allow children to play unsupervised with any dog, including an Ariegeois. Supervise playtime to ensure the dog is not aggressive and the youngster is properly interacting with the dog.

Originally, Ariegeois were bred as pack dogs. As a result, they get along quite well with other dogs.

This is especially true for dogs whose energy level and demeanor are compatible. If you currently have dogs in your household, this may be an excellent breed to add.

On the other hand, if you have little animals in your household, an Ariegeois should not be your breed of choice. This includes cats, rabbits, guinea pigs, and other small animals.

Because Ariegeois were hunters of small animals, they are known to be aggressive with those sorts of pets.

The coat is smooth and short, white with well-defined black markings; it is occasionally speckled, and tan spots on the head are possible.

The dog’s head is slender and elongated. There are no creases in the fabric—dark and kind eyes. Ears are quite soft and medium in length.

The muzzle is modest in length and has a black nose. The neck is slim and slightly arched, leading to a thin and deep chest.

The feet are tough and fox-like in appearance. The tail is curled slightly. In general, the Ariegeois is a skilled scenthound who is friendly and calm in the home.

The Ariegeois is presently being raised in Italy for wild boar hunting, where it performs admirably under Italian conditions.

Excellent speed, a level of endurance uncommon in hounds of this size.

A voice that is shockingly deep and powerful, as well as an extraordinary sense of smell. Temperamentally even, he is essentially sociable and gregarious.

The name Ariegeois refers to the place in which the Ariegeois dog breed originated: Ariège in southern France.

With a history of just over 100 years, the Ariegeois is a relative newcomer and thus relatively unknown outside of France. Breed members have been exported to Italy and Spain in recent years.

The Ariegeois was derived from the Grand Bleu de Gascogne and the Gascon Saintongeois, alongside a number of other medium-sized French hounds.

Scent hounds have always been in demand in France, where residents have enjoyed hunting as a pastime with their canine companions for decades.

A great scent dog, the Ariegeois utilizes its enhanced sense of smell to locate and pursue its target back to the waiting hunters.

While they were frequently utilized for hunting up until the Second World Conflict, the breed came perilously close to extinction during and after the war.

Despite their small population size, the breed was never outcrossed and managed to grow its numbers by breeding solely Ariegeois dogs — a feat that few other dog breeds have done.

The breed, which is currently recognized by the FCI and the UKC, is most frequently used as a hunting dog, however it is also considered a companion animal in France.

Because the Ariegeois is a somewhat rare breed, it may be difficult to find a breed-specific rescue and adopt.

However, you can always check with your local shelter, and you may want to try a rescue that caters to all types of dogs.

If you want to pet a similar breed like the Ariegeois, consider taking time in researching about these breeds:

Do Ariegeois dogs have an aggressive behavior to protect their territory?

Ariegeoiss strongly protect their territory. This breed is a complete security guard, so you don’t have to be afraid in case of danger.

Ariegeoiss are good for novice owners, due to their easy-going personality.