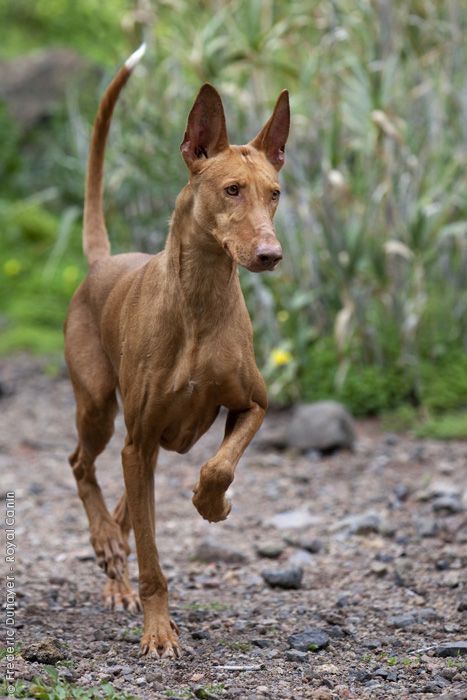 The Andalusian Hound is a hunting hound that is renowned for its keen senses, stamina, and endurance when running.

An attractive and aristocratic dog with a well-balanced, lithe, and muscular body, the first thing you’re likely to notice about this creature are its big ears.

While the Andalusian Hound is available in three sizes (small, medium, and giant), its ears are always the most noticeable feature.

While the Andalusian Hound is not yet universally acknowledged as a distinct dog breed (mostly due to its resemblance to the Portuguese Podengo), it is well-known in southern Spain, where it is still utilized for hunting small game.

The Andalusian Hound is not known to have any known health problems.

While this may be partly due to the hardiest dogs’ natural survival in harsh environments and the general healthiness of most hunting hounds, it is also possible that, due to poor record keeping and a dearth of relevant studies, the health problems encountered by this breed are not widely known or publicized.

Having said that, all dogs can develop a variety of health problems throughout their lives, and lack of a tendency to a particular disease does not ensure the Andalusian Hound a disease-free existence.

Routine health examinations at a veterinarian facility are strongly advised, as are immunizations and routine parasite prevention for all dogs.

The average life expectancy of an Andalusian Hound is between ten and twelve years.

Because it is not a hypoallergenic breed, it is not advised for people who suffer from allergies.

Regular brushing and claw clipping should be introduced at a young age to ensure that they accept these procedures as part of their daily routine.

They have huge ears that should be examined routinely for wax or debris.

As is the case with the majority of working dogs, the Andalusian Hound thrives while outdoors and active. It is self-evident that they must be nimble and quick in order to catch a fleeing hare.

They enjoy running and are content with time spent off the lead. Due to their stamina, they are content to run for extended periods of time; therefore, they must be walled in if left outside unsupervised.

Inadequate exercise for the Andalusian Hound can result in pent-up energy that can be released in unpleasant ways, such as destructive behavior.

If kept as a pet, it is critical to offer appropriate daily activity for the Andalusian Hound, which should include long daily walks and varied mental stimulation activities like obedience training and agility lessons.

Always eager to serve their master, these dogs will flourish under the leadership of a firm and consistent leader who employs positive reinforcement training.

If the Andalusian Hound is handled badly, it will lose respect for its owner and will unwillingly perform the chores assigned to it.

They are swift dogs with a natural hunting urge and must therefore be kept on a leash in open areas where they can easily become distracted by small, moving prey. They are intelligent and willing, making them a lot of fun to train.

Due to the fact that the Andalusian Hound is available in three different sizes, you should select a high-quality diet specifically created for dogs of this size.

The tiny and medium-sized varieties of the breed can be fed high-quality dry meals intended for small- or medium-breed dogs, respectively, while the giant variety should be fed a large-breed-specific recipe.

The Andalusian Hound, as a hunting breed with exceptional stamina, may also benefit from an active or working breed formula.

The Andalusian Hound is renowned for its familial loyalty and gentle demeanor. They are admired for their intelligence and ability to swiftly pick up new responsibilities.

Their intelligence can make them more demanding, and they are prone to behavioral problems if they are not physically active or mentally stimulated.

The smaller types, particularly the Maneto (or dwarf variant, as described previously), can be very good with children, especially if introduced early in the dog’s life.

Once habituated to family life, they can be friendly and are constantly up for a game, exhibiting an unmistakable mischievous streak.

It is advisable to exercise caution while introducing new animals, especially smaller ones, as it is not uncommon for the Andalusian Hound’s inherent hunting instinct to kick in and they will pursue.

Naturally vigilant and watchful, they are quick to alert their owner to the presence of a new individual. They can be suspicious of strangers and perform best in their owners’ presence, where they feel most at ease.

With a tendency to be subservient at times, a positive relationship with a confident and supportive owner is vital to eliciting the best performance from these sweet-natured hounds.

As is the case with the majority of working dogs, the Andalusian Hound thrives while outdoors and active.

It is self-evident that they must be nimble and quick in order to catch a fleeing hare. They enjoy running and are content with time spent off the lead.

Due to their stamina, they are content to run for extended periods of time; therefore, they must be walled in if left outside unsupervised.

Inadequate exercise for these animals can result in pet-up energy that can be released in unpleasant ways, such as destructive actions.

If kept as a pet, it is critical to offer appropriate daily activity for the Andalusian Hound, which should include long daily walks and varied mental stimulation activities like obedience training and agility lessons.

Andalusian Hound Relationship with Children and Other Pets

In the home, these dogs are active and happy, and the smaller varieties of the breed often get along well with youngsters.

This dog is naturally eager to comply and thrives in the presence of a strong authority figure.

Andalusian Hounds are naturally protective and cautious of outsiders, which makes them excellent watchdogs.

All About Andalusian Hound

The Andalusian Hound is available in three sizes (big, medium, and tiny) and three coat varieties (wire-haired, long-haired and smooth).

This combination of variables can produce nine distinct kinds.

Additionally, there is a dwarf or basset variant produced from a medium-sized short-haired Andalusian Hound — dubbed Maneto due to its short, strong legs — that the RSCE has provisionally recognized as an unique breed.

Andalusian Podencos, like other hounds, have exceptional vision, hearing, and scent, making them outstanding hunters. They are frequently used to hunt rabbits.

Andalusians and mastiffs are the backbone of the rehalas (teams of 20 to 24 hunting dogs) in the central and southern Iberian Peninsula; medium and smaller dogs are used to locate deer or wild boar, while the larger hounds attack the prey.

Among the most characteristic roles of the huge Andalusian hound was that of the so-called quitaor, who accompanied the Spanish Greyhound colleras on hare hunts.

The quitaor’s primary responsibility was to flush out and kill the hares from their homes or hiding places, and then retrieve them for the owner using the Greyhounds.

Originating in southern Spain’s Andalusian area, the Andalusian Hound is said to be descended from the European hunting dog.

There was some conjecture that they were one of the old breeds represented in cave paintings around the Iberian Peninsula thousands of years ago, but subsequent DNA investigations have cast doubt on this notion.

Additionally known as the Podenco Andaluz, this breed was only recognized legally in Spain in 1990, when a breed organization was founded.

Due to the Andalusian Hound’s lack of obvious unique qualities and similarities to other dog breeds, most notably the Portuguese Podengo, it is not commonly recognized as a distinct breed outside of its native country.

Historically used as hunting dogs, their senses of sight, hearing, and scent have been finely tuned over time, and they have adapted to the hot and dry circumstances of the desolate region from where they came.

They are renowned for their ability to hunt successfully and methodically. While the smaller Andalusian hounds are typically used to hunt hare or rabbits, the larger varieties are capable of hunting wild boar. Typically, they hunt in packs.

Where to Adopt Andalusian Hound:

If you want to pet a similar breed, consider taking time in reading the pros and cons of these:

It may be difficult to find a breed-specific rescue and adopt. However, you can always check with your local shelter, and you may want to try a rescue that caters to all types of dogs. You can take a look at the following:

Is the Andalusian Hound suitable as a pet?

Podencos are typically considered to be robust, healthy, and hardy dogs. Because there is no universal breed standard, they do not inherit as many inheritable diseases.

Is a hound a suitable family pet?

Numerous hound breeds are wonderful family dogs and are fantastic with children.