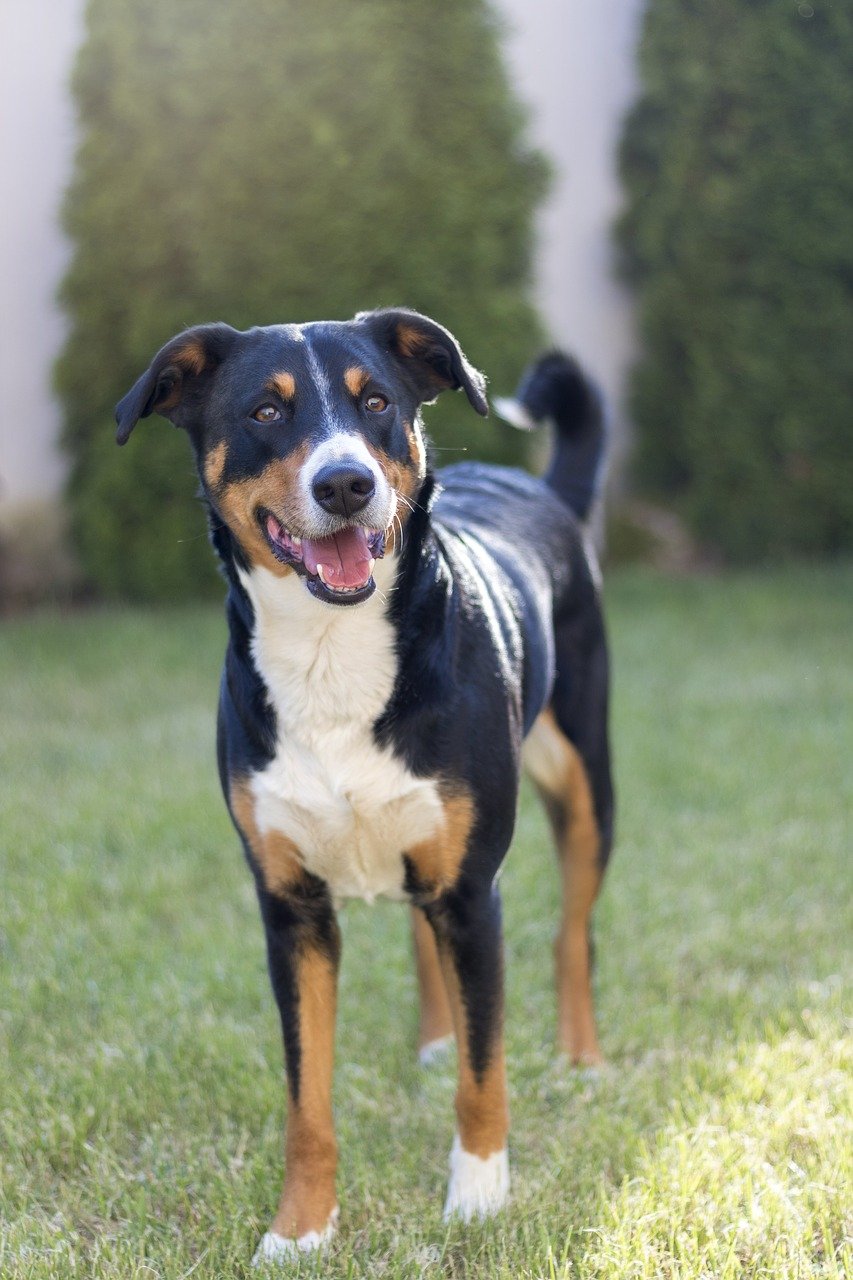 The Appenzeller Sennenhund is tri-color, medium-sized, and almost squarely built and balanced.

He is muscular and agile and makes a good driving, watch, guard, house or farm dog. Due to their versatility and willingness, they excel in agility, obedience, herding and search and rescue.

The Appenzeller Sennenhund is also known as the Appenzeller Mountain Dog or Appenzell Cattle Dog. He is lively, high-spirited, self-assured, reliable and fearless. Slightly suspicious of strangers, he is a good watchdog who cannot be bribed.

The breed’s intelligence make them highly capable learners. Due to his personality and exercise needs, he is ill-suited to apartment living.

The Appenzeller is a generally healthy breed with very few health problems. Lifespan is 12 to 15 years, but it is very uncommon for them to live much longer.

The Appenzeller is closely related to three other Swiss mountain dogs: the Entlebucher, the Bernese and the Greater Swiss all of whom have issues with hip and elbow dysplasia, hereditary eye diseases, and bloat.

So you can expect those health issues in the Appenzeller.

Some health problems are inherited. For example, if your dog inherits from his parents the genes for an eye disease called PRA, he will go blind and there’s nothing anyone can do about it.

Appenzeller has a thick, lustrous top coat of black or brown with tan and white patterns covering a thick undercoat of black, brown, or gray.

Tan markings emerge over the eyes and the cheekbones, chest, and legs, and are symmetrical.

A blazing on the face, white from the chin to the breast, white on all four feet, and a white tail tip are among the white markings.

Appenzellers have a low-maintenance coat that requires only frequent brushing to keep it in good condition, but they do shed.

An Appenzeller is a high-energy herding/working breed. They are incredibly smart and require a job.

Early socialization is essential, as is training at a young age. They are a large, powerful breed with a tremendous speed that needs plenty of space to run.

He loves to stay outside, where his powerful herding and guarding instincts, as well as his attachment to his territory and ‘people,’ keep him from fleeing.

The Appenzeller is a high-spirited, capable, and dependable dog. Early socialization and dog training are critical.

They are extremely bright and require a reasonable but firm ‘leader.’ The Appenzeller does not respond well to harsh or forceful treatment, but the owner/trainer must be tough, respectful, and, most importantly, consistent in their training.

This breed is wary and guardian of his area, house, and humans. It is critical to connect the Appenzeller with humans, dogs, as well as other animals from an early age, as well as expose him to a range of environments and scenarios.

While the Appenzeller is not for everyone, especially first-time or novice dog owners, a well-trained Appenzeller is a loyal and loving friend. Give him a job and effective leadership, and he will be dedicated and satisfied.

Make providing high-quality, nutrient-dense food a major priority for your dog’s nutrition. Appenzeller isn’t known for being finicky eaters or having allergies, so look for a formula with few additives and high-quality protein sources.

Maintain a regular feeding plan for this active breed, with an extra treat for a sense of accomplishment.

The Appenzeller Mountain Dog is very affectionate to his family and usually gets along well with livestock, other dogs and household animals when they are properly socialized as puppies.

Proper training and consistency are important to ensure that the Appenzeller Mountain Dog knows their role within the family or on the farm.

They must understand their place within the family pack and not feel that they can challenge for a higher position within the pack.

Appenzeller Mountain Dogs are very intelligent and they learn quickly. It is easy to train him to perform a specific task and they love to be outdoors.

Adult Appenzeller Mountain Dogs should be introduced slowly to other animals if they have not been properly socialized or trained.

The Appenzeller was designed to herd animals and spend the days and nights protecting territory in the Swiss Alps.

As a consequence, these canines are happy when they have a task to complete and can spend time outside. Train these lively dogs for activities such as speed, weight pulling, obedience tests, and others to utilize their intelligence and energy.

They’re a great choice for herding activities and guard dog patrol if you have cattle or a big piece of property.

You should be aware that the breed’s protected nature causes them to bark at any imagined threat, whether justified or not.

They can be susceptible to barking to the extent of becoming a problem, so put a stop to excessive barking over small stuff right away.

The Appenzeller might be distrustful of strangers due to their instinctive drive to protect their turf. This breed is not particularly friendly to strangers and necessitates early socialization as well as careful introduction when you have visitors.

Owners of Appenzellers, on the other hand, find them to be highly affectionate and dedicated friends, even with kids and other pets.

Exercise contributes significantly to Appenzeller’s happiness and health. As previously said, these active animals are ideal for a variety of dog sports, but they are also fantastic trekking and backpacking companions.

They’re sure footed and athletic, having enough endurance for climbing up trails or plowing across snow.

Appenzeller Sennenhund Relationship with Children and Other Pets

The Appenzeller Sennenhund being a herding dog also make a good family companion. They are very gentle with children of all age and will protect them from everything.

They likes playing with children since they love being busy. These mountain dogs can be the good play mates for your kids.

As with every breed, you should always teach your child when and how to approach a dog. They are less tolerant and must avoid pinching, pushing and bothering while they are eating.

All About Appenzeller Sennenhund

This is the rarest of the four old Swiss mountain dog breeds, also referred to as the Appenzeller Mountain Dog. In the Swiss Appenzell region, he began his career as an all-around farm dog, herding livestock, pulling carts, and defending the farm.

The Appenzeller is today known as flexible working and a household dog that is smart, happy, self-assured, dependable, and brave.

His modest apprehension around outsiders and tendency to bark makes him an excellent watchdog, but he needs extensive early socialization to avoid becoming unduly suspicious. And, due to his barking, he’s not the best dog if you have neighbors nearby.

He is a good buddy to youngsters, but he may nibble at their heels as if they were cattle to be herded; younger Appenzellers are enormous and enthusiastic enough to knock over little children.

This breed is not suitable for an inactive lifestyle because he has a strong work ethic and energy. Provide him with instruction and a job or dog activity that he can participate in; otherwise, he’ll be a grumpy camper.

Like other breeds that require a lot of activity and stimulation, he might become bored and violent if he doesn’t receive enough of it.

He performs admirably in agility, herding, and obedience contests. Train your Appenzeller to pull a cart with your gardening equipment at home.

The Appenzeller sennenhund’s origins are uncertain, however, one hypothesis holds that sennehunds are derived from the historic Molossus type introduced to the area by the Romans.

These enormous, mastiff-like dogs were used for livestock guarding and may have influenced Sennenhunds’ large bone structure and innate herding behavior.

As previously noted, regional use and development of the Sennenhund resulted in four distinct breed varieties, including the tiny yet strong Appenzeller.

Despite the fact that the breed’s origins are unknown, it is firmly accepted that the Appenzeller was a part of everyday life in the Alps by the 1800s.

In actuality, the breed’s first written description dates from 1853 and describes it as “a barking, short-haired, medium size, multicolor cow dog of a pretty even “Spitz type,” which can be found in particular places and is used partly to guard the farm, partially to herd cattle.“

So, from the breed’s inception, it is clear that they were diligent animals, equally competent in guarding and herding chores.

Max Siber, an Appenzeller forester, realized the necessity for a breeding program and standard to conserve these exceptional sennenhunds in the late 1800s.

Mr. Siber introduced the breed to the very first international dog show in 1898, and the Appenzeller Sennenhund Club and an official stud book were established in 1906.

Despite being a useful working dog and a much-loved family pet, the breed has gained international recognition more slowly than the Bernese Mountain Dog.

In 1993, the United Kennel Club (UKC) recognized the Appenzeller as a breed. It has Foundation Stock Service (FSS) with the American Kennel Club (AKC), which implies the organization supports the breed’s development efforts, but it is not yet an AKC-registered breed.

Where to Adopt Appenzeller Sennenhund

While other Swiss exports are widely available in most countries, the Appenzeller sennenhund is far more difficult to come by.

The breed has spread to Europe, and breeders can even be found in Canada and the U.s., albeit they are few and far between.

It can be tough to find and buy one of these prized puppies, but it is not impossible.

Just be prepared to put in some effort to find a breeder and take your puppy home. North American breed clubs are a wonderful place to start.

Look into the following resources:

Do your research on the Appenzeller’s temperament and energy requirements to learn more about this breed.

Check with dog groups to learn more about the fascinating history of this lovely and adaptable sennenhund.

You might also be keen to learn more about the following Swiss dogs:

Families that can offer these dogs with the mental and physical development they require will be compensated with an affectionate and devoted friend.

Are Appenzeller Sennenhunds suitable for children?

According to a well-known dog group, Appenzeller Sennenhund Dogs have a rating of 5 out of 5 on a scale of dog breeds that are suitable for children.

Despite being smaller than many of the other guard dogs, Appenzeller Sennenhunds are an excellent choice for a guard dog due to their agility and enthusiasm.