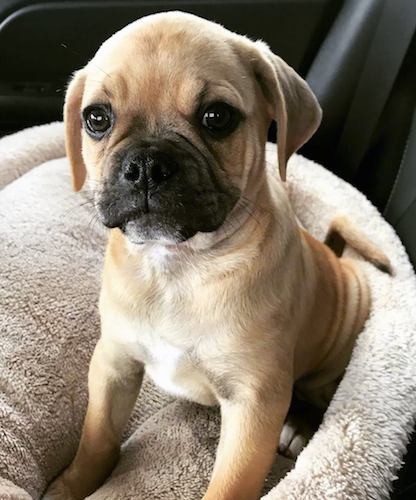 The American Pugabull reaches a height of 16 – 20 inches, which is comparable to a medium-sized dog’s build.

They can weigh between 30 and 60 pounds, which is neither very light nor excessively hefty. Additionally, the length is proportional to the height.

The American Pugabull is a cross between a Pug and an American Bulldog. This breed possesses all of the positive characteristics of its parent breeds.

It, like the Pug, is amiable and active. Its jumpy, kpassionate, and loving attitude will help keep the spark alive in your home.

Bulldog characteristics make this breed extremely protective and devoted. They are fearless and courageous, and are constantly on guard.

They are extremely friendly toward children and can be an excellent source of engagement for them.

The American Pugabull is predisposed to several of the same health problems as the American Bulldog and Pug.

While the majority are generally healthy, some are predisposed to a few health problems, which is why it is critical to provide proper care and schedule frequent veterinary visits.

Several of the more prevalent health problems encountered by American Pugabulls include the following:

Pugabull coats are frequently a combination of the coats and colors of their American Bulldog and Pug parents.

Pugabulls’ primary hues include tan, cream, brown, black, red, and white, and they are rarely solid. They are frequently a combination of two or more colors.

Although this breed is not hypoallergenic, their short coats make them easier to groom. Two to three times per week, a thorough brushing should suffice. Bathe them with a light shampoo on a monthly basis or as needed.

Due to their shorter coats, American Pugabulls are not well-suited to harsh weather.

In the winter, your dog will almost certainly require a coat, and in the summer, you may need to apply dog sunscreen to the ears, nose, and other vulnerable places with less hair coverage.

While the American Pugabull is descended from two intelligent breeds, he may not always accept your commands due to a stubborn tendency shared by both parent breeds.

While the Pug may suffer from “little dog syndrome,” in which he believes he dominates the household, the Bulldog may naturally assume the role of alpha dog and will require a strong pack leader whom he can respect and obey.

As a result, early obedience training is crucial for bringing out the best in this dog and ensuring he becomes a valued member of your family.

Because the Bulldog’s guarding drive is fairly strong and can cause him to be dog aggressive, socialization from the time he is a small puppy is absolutely necessary.

Without it, you’ll have a dog that is unable to live in a family with other pets or be accepted at a dog park.

It’s as simple as exposing him to new faces, sights, noises, smells, and other animals in a controlled and friendly atmosphere, which will help him become more comfortable and less reactive around other dogs and small animals.

Take a firm consistent approach with this dog that repeats the rules and sets your expectations using goodies and verbal praise to keep him interested and reinforce positive behaviour.

Your new canine is a cross between two breeds with markedly different exercise requirements: While the Pug enjoys interactive play and short walks, the American Bulldog requires a more strenuous training that may include agility and more aggressive walks

As a result, you can anticipate the American Pugabull requiring a combination of daily short walks, the opportunity to chase balls or Frisbees, and the freedom to run.

However, when it comes to “running loose,” socialization is critical before taking him to a dog park. You don’t want him to become persona non grata due to aggressive activities.

With your dog being brachycephalic (flat-faced), breathing might be a problem in warmer weather or with excessive exercise, so moderate your activities and schedule some inside playtime for when temps spike. Important advice – this dog requires an outlet for his energy, so never, ever skip his activity lest he develop some destructive tendencies to express his annoyance.

A Pugabull diet should be designed for a medium-sized dog with moderate to high energy.

They have a tendency to gain weight when overfed, so maintain a consistent feeding schedule and avoid leaving food out during the day. Additionally, limit their treat intake.

As with all dogs, the Pugabull’s nutritional requirements will change as they mature into adulthood and continue to do so into their senior years.

You should consult your veterinarian on your Pugabull’s food, as there is just too much variety between individual dogs in terms of weight, energy, and health to provide a specific recommendation.

Numerous Pugabull enthusiasts in the United States characterize these dogs’ characteristics as playful and protective.

While they are around the size of a lap dog, their moderate to high energy levels imply they will want plenty of play time. They will also take pleasure in accompanying you throughout the day.

Certain Pugabulls may exhibit prey drive. Early socialization will ensure that they get along well with other dogs. They thrive on mental and physical stimulation and adore being observed.

They will alarm you if any questionable individuals approach your door, though they may get excessively yappy, which can be mitigated with training. These puppies make excellent watchdogs.

Early training is critical for American Pugabulls. They require a strong leader and may attempt to test you, but for a patient, consistent owner, their loyalty and desire to please will make training a little easier.

They may develop small-dog syndrome if not properly trained. Assure them that you are in charge.

Additionally, they gravitate toward their primary caretaker, yet they are sociable and affectionate with all members of the home.

Provide them with plenty of love and care, and they will step up as the family’s protector.

As with other dogs, you should schedule regular veterinary exams for your American Pugabull to catch any health concerns early. Your veterinarian can assist you in developing a regimen for caring for your dog that will keep it healthy.

Pugabulls are prone to obesity and possess an abundance of energy.

Assure that your dog has many short walks each day interspersed with energetic play sessions. If, on the other hand, the American Bulldog parentage dominates, this pup may demand a more strenuous exercise routine.

Daily check their ears for debris and parasites and clean them as directed by your veterinarian. Trim your dog’s nails regularly, usually once or twice a month.

They should not make contact with the floor. Your groomer can assist you in this.

Your primary priority when it comes to caring for your Pugabull will be their oral health. Brush your Pug’s teeth everyday, as small breeds such as the Pug are prone to dental problems.

Your veterinarian can advise you on the correct tooth brushing technique for your dog.

American Pugabull Relationship with Children and Other Pets

As with most breeds, socialization training for American Pugabulls should begin early.

Pugabulls are excellent with youngsters and are extremely loyal to all family members when properly trained.

Additionally, it is critical to educate children on correct animal handling and treatment in order to avoid incidents.

Even if your dog is adequately trained, you should constantly supervise them while they play with youngsters to prevent things from getting out of hand.

Likewise, for interactions with other pets. Pugabulls often get along well with other dogs and pets as long as they are socialized and trained properly.

Play should be supervised, even more so with smaller dogs, who are prone to injury while playing with a larger dog.

While this breed is generally sociable, injuries can occur when they are overly eager to play rough or are unaware of their own strength.

Discover more about this breed by reading about its parents, the American Bull Dog and Pug.

The assertive little American Pugabull combines the pug’s perky, sociable disposition with the American Bulldog’s loyal, protective nature to create an excellent family dog who is extremely dedicated to his human pack and an excellent watchdog.

This handsome pup is excellent with children and other animals, but only after early socialization, as his guarding instincts may cause him to become violent toward other dogs and smaller animals.

Because he is descended from the vivacious American Bulldog, his ideal family will be active and willing to commit the time necessary to keep him physically healthy and cognitively stimulated.

Because the American Kennel Club (AKC) does not register non-purebred dogs, the American Pugabull is not eligible for membership, however one of his father breeds is a long-standing member and a North American favorite: the Pug.

Yes, the curious little Pug joined the American Kennel Club’s “toy” group in 1885 and is described as cute, mischievous, and lovable. The American Bulldog has yet to join this exclusive club.

While the American Pugabull dog breed may have developed organically over time, designer breeders began purposely combining American Bulldogs and Pugs in North America in the late 1990s.

Breeders desired a cross between the two parent breeds in order to make the ideal companion dog.

Mixing breeds can also help avoid some of the problems associated with purebred dog inbreeding. As demand for mixed breed puppies increased, they continued to breed American Pugabulls.

Despite the fact that the American Pugabull originated as a designer breed, some have ended up in shelters or the care of rescue organizations. If you decide this is the breed for you, consider adoption.

The American Pugabull is a less frequent mixed breed that is regarded to be an uncommon, newer hybrid.

The Dog Registry of America (DRA) and the American Canine Hybrid Club acknowledge them (ACHC).

Where to Adopt American Pugabull:

Consult your local shelters, search for Pugabull rescues, or contact breed-specific American Bulldog and Pug rescues, since they are frequently willing to assist in rehoming a mixed breed puppy.

Because American Pugabulls are a mixed breed, it may be difficult to locate a breed-specific rescue.

However, you may wish to contact American Bulldog or Pug breed-specific rescue organizations, as they frequently accept mixed breeds.

If you want a similar breed like American Pugabull, consider taking time reading about its parents:

What exactly is a Pugabull?

The American Pugabull is a hybrid between the American Bulldog and the Pug dog breeds. These pups are medium in size, attentive, and loyal, inheriting some of the best characteristics from both of their parents.

How does a Pugabull costs?