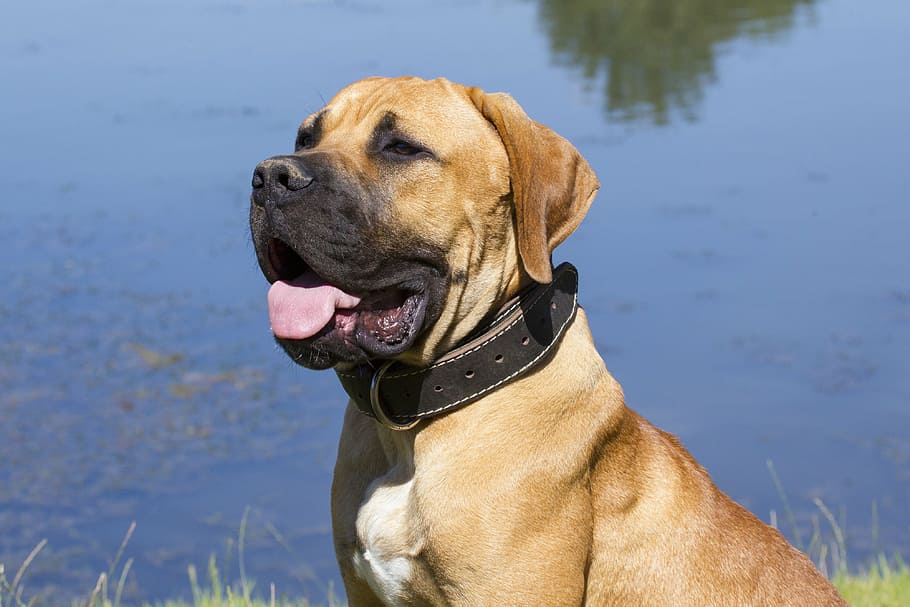 The mouth of the American Mastiff is substantially drier than that of other Mastiffs.

The drier mouth is the result of outcrossing the English Mastiff with the Anatolian Mastiff, which occurred early in the breed’s evolution.

The American Mastiff is a huge, powerful, and hefty dog. Dignity rather than gaiety; peaceful, serene, kind, and devoted. However, he is not aggressive.

The American Mastiff adores children and is dedicated to its owners.

It is non-aggressive except when its family, particularly the children, is endangered. In such cases, it takes on the role of a valiant defender.

The American Mastiff is wise, kind, and kind, patient and understanding, and extremely loving with its own humans. It is neither shy nor vicious. It is devoted and devoted.

Because these dogs are Mastiffs and grow to be very enormous, they should only be with an owner who understands how to demonstrate strong leadership. The goal of teaching this dog is to make him the pack leader.

Wagner established the American Mastiff breed in part to address some of the health issues identified in the English Mastiff.

Unfortunately, the American Mastiff is susceptible to some of the same health issues, but the danger is slightly reduced.

Eye difficulties, joint dysplasia, heart problems, hypothyroidism, arthritis, bloat, and skin disorders are some of the ailments that this breed may be prone to.

You can usually get away with brushing your dog once a week, but if your dog is in a major shedding phase, you should brush him at least twice a week.

The American Mastiff rarely needs to be bathed, but it is a good idea to rub them down with a moist towel every other week to keep them smelling nice.

Although the coat of the canine is short and straight, the sheer size of this dog implies that maintenance will take some time. Grooming time will not bother your giant friend because they seek your attention and interaction.

It is best to train your canine when they are young to get used to having their teeth brushed on a regular basis, as well as having their ears examined and toenails trimmed.

If you postpone it, your gentle giant may push you away and refuse to cooperate. To avoid drooling, this enormous dog’s mouth must be wiped after eating and drinking.

The American Mastiff does require some activity to stay healthy and happy, though they can become lazier as they age.

A daily walk or two is good; they will cheerfully follow you about and take in the sights. Walking is an excellent way to socialize your dog and get them used to meeting new people and canines.

Forget about long runs or cycling with this dog because their size prevents them from maintaining a brisk pace for long.

They must be mentally and physically challenged. If either is lacking, this pup can become agitated, disruptive, and overall difficult to live with due to their stubbornness and disobedience.

They are incredibly brilliant, yet they can be difficult to train since they prefer to do things their way.

If the training is too repeated, they will lose focus and become bored, which means they will not obey when you want them to.

They require a strong leader/owner that follows their own rules and is consistent with their training. This remarkable canine is best suited for an experienced dog handler who is used to dealing with large dogs.

These canines, however, are fairly tough to train and are best suited for experienced dog owners.

Training and socialization for this dog should begin at a young age to guarantee that this breed grows up to be peaceful and well-adjusted.

The American Mastiff, as a big breed, should be given a high-quality recipe designed exclusively for large-size dogs.

These meals are high in protein to maintain lean muscle mass and low in fat to keep the calorie count under control.

Because of his size, the American Mastiff requires a lot of calories, but you need to carefully limit his meals to avoid obesity.

While the size of this friendly canine may appear intimidating to a guest, they are not an aggressive dog unless you or a family member is threatened.

Beware, for they will defend their family with exceptional bravery and determination.

The American Mastiff is a quiet, dignified dog that is completely loyal and devoted to you; they are loving and gentle, and can even be ‘clingy.’

They enjoy being with their family and miss them when they are separated.

They do have some quirks that may take some getting used to, like flatulence, snoring, fur shedding, and slobber.

They may be dignified, but they are not refined! They can be apprehensive of strangers at first, but after they get to know someone, they return to their typical friendly selves.

They make excellent guard dogs since they will alert you to intruders. They can be difficult to train since they want to do things their own way and may reject your approaches.

Patience and gentleness are required; yelling or losing your cool will not work with this dog.

Instead, make the training enjoyable. Reduce the number of repeats to avoid boredom, and include tasks that stimulate their brain talents to encourage children to think more about how to solve a problem.

They adore children and are gentle and friendly to them, but constantly supervise a young dog because their size can cause unintentional injury to small children.

Although the Mastiff sheds moderately, its short coat makes grooming easier. Brush monthly to eliminate dead hairs and to keep as much fur off the floor and sofa as possible.

Fortunately, the Mastiff will usually appreciate the attention, and it will provide an excellent opportunity for the two of you to bond.

While the Mastiff is not the most clever breed, it is intelligent enough to acquire basic training.

However, just because it is intelligent enough to do so does not guarantee it is capable of doing so.

The breed is well-known for its stubbornness, and if it does not like to learn something, it will just refuse. Keep training sessions brief and enjoyable, and do not place unreasonable expectations on this breed.

While the American Mastiff does not require a great deal of activity, he does have some daily requirements. Take your mammoth out once a day for almost a half hour; this should provide adequate exercise.

You should not anticipate your Mastiff to run or walk too long distances, as this is a breed that can rapidly weary. Excessive exercise might result in physical ailments such as joint dysplasia.

American Mastiff Relationship with Children and Other Pets

The American Mastiff is a pleasant, loyal, and loving animal that will develop a strong attachment with every member of its household.

It rarely favors one member of the family over the rest, and it gets along with family members of all ages.

Due to its size, you must exercise caution while giving unsupervised time with youngsters, as loving and understanding as the Mastiff is, it is a large dog that has the potential to injure family members.

Although this dog is not known for being overtly aggressive, it is an extremely protective animal that will not hesitate to intervene if it believes the family requires its protection.

Again, you must consider the animal’s size and any other household members, but the Mastiff does not often have a predatory drive and hence will not attack other dogs or cats.

To achieve the greatest results, it is always better to introduce a new dog to existing pets when they are still young.

This allows them to develop a sense of acceptance for one another before they mature.

All About American Mastiff

The American Mastiff is nothing short of a colossus of a dog.

This colossal canine may weigh nearly 200 pounds and stand up to 36 inches tall. That’s a lot of dogs, yet they’re not aggressive and have a calm disposition.

They can be headstrong and want to get their own way, so they require an experienced dog handler to raise them to their full potential.

This dog needs a strong leader with a lot of patience; else, they can take over and become demanding. They, on the other hand, have a pure heart and adore their family.

They are kind and compassionate to youngsters, demonstrating patience and tolerance for their misbehavior.

This dog, like all dogs, requires early socialization to foster pleasant interactions with strangers and other canines.

The American Mastiffs mouth is drier than the English Mastiff, which implies less drool – but not none.

A large dog needs extra space in a house or apartment, but luckily they are quite the couch potato and are pretty inactive inside and rarely bark. They make excellent friends and watchdogs.

Although Mastiff dogs have been around for millennia, the American Mastiff is a relatively recent breed.

Originally, they were developed as English military dogs, with the task of assaulting opposing soldiers. They were a dog to be feared, vicious and tenacious.

They guarded the privileged and wealthy homesteads between conflicts and were occasionally trained in the sport of bear baiting.

Thankfully, the dog’s hostility has been bred out in recent years, and they have mellowed into a friendly giant. Mastiffs arrived in America on the Mayflower with their colonist owners and were used to defend people, livestock, and property.

Unfortunately, there were many inbreeding concerns that began to cause health complications, and a breeder named Fredericka Wagner in Piketon, Ohio decided to breed a new Mastiff to address these issues.

She started in the late 1980s, carefully combining the Anatolian dog with the Mastiff.

The progeny were carefully selected in terms of who they were bred with, and Fredericka eventually developed the dog with a tighter lip line.

The American Mastiff she named had a drier mouth and drooled less than the parent Mastiffs. Wagner had stopped outcrossing and was breeding with her current dog lines by the late 1990s.

This has reduced the gene pool to just 11 breeder members, who work hard to maintain their dogs’ health and disposition.

The debate over whether the American Mastiff is as good as its breeders say continues, but the truth remains that they have created a gentle giant of a dog that excels in health and temperament so far.

Where to Adopt American Mastiff:

Even in North America, the American Mastiff is an extremely unusual breed. You may need to join a waiting list or go further away to get a puppy from a reputable breeder.

If you are interested in getting a similar breed, consider taking time in reading these:

American Mastiffs are a calm, loyal, and affectionate breed of dog that gets along well with youngsters when properly socialized — they also get along with other dogs and household pets.

American Mastiffs: Are They Aggressive?

The American Mastiff is a dog that can only be characterized as a colossus. That is a large dog, but fortunately, they have a gentle disposition and are not aggressive.

What distinguishes an English mastiff from an American mastiff?