The American Bulldog is an aggressive, vigorous working dog with a domineering, powerful, and athletic demeanor, with strong muscles and heavy boning. He is known for his strength, bravery, and work qualities, whether he is guarding land or moving animals.

Here at pawesomepuppy.com we are always happy to talk to our visitors. Please get in touch either by emailing us Read more

Please be advised pawesomepuppy.com are not veterinarians and we do not have any qualifications in pet care. The information on Read more

pawesomepuppy.com is a participant in the Amazon Services LLC Associates Program, an affiliate advertising program designed to provide a means Read more

The American Bulldog is a relatively healthy breed. Owners should follow their veterinarian’s recommendations for exams and vaccines. Hip and joint disorders are a concern for this breed, thus hip and elbow exams should be performed as well.

The American Bulldog, like other breeds, is susceptible to inherited health issues. Breeders should examine any possible mating partners for genetic problems ahead of time.

All dog breeds, including American bulldogs, have the potential to develop health issues. This breed is also prone to allergies induced by an overactive immune system. Their symptoms are treatable if they do not grow out of them completely.

Getting an allergy test and feeding your dog an appropriate diet may be beneficial. Red and itchy skin, as well as licking paws, are common symptoms of food allergies in dogs. If you notice any of these symptoms, see your veterinarian about possible allergens.

Other health problems that American bulldogs are prone to include:

American Bulldogs have a short coat that sheds moderately all year and doesn’t require much care. Brushing once a week should keep it under control, with baths as needed.

The American Bulldog is a sports dog. To reduce the risk of bone and joint damage in pups, parents should engage in non-impact exercises.

The American Bulldog will require a variety of activities as an adult, including jogs, treks, tug-of-war games, and training exercises. When left alone in the backyard, the breed does not fare well.

As a result of this, you may have a number of behavioral issues associated with pent-up energy. This breed necessitates regular exercise and stimulation. Developing his athletic ability will assist this breed in remaining fit and joyful.

Early socialization and puppy training programs are critical in channeling the enthusiasm of the American Bulldog. Rules and routines should be established early on and followed as the dogs mature.

To create and maintain proper limits, they demand a firm but kind touch. The more exposure they have to good training procedures, other dogs, and people, the better their chances of being controlled both inside and outside of their environment.

An American Bulldog diet should be designed for a large to giant breed, taking into account their high energy level. Their requirements will change as they grow from puppies to adults.

It’s better to consult with your veterinarian or a professional nutritionist about your dog’s individual dietary needs. You should talk to them about creating an appropriate diet for your dog.

Since American bulldogs are so energetic and strong, they require a high protein diet. The first element in the correct dog food should be animal protein, omega-3 fatty acids for optimum health, and a limited amount of carbs to avoid weight gain. Because certain bulldogs are prone to getting overweight, following a veterinarian-approved diet is critical.

If you’re not sure about your pet’s allergies, it’s a good idea to experiment with a few different protein options before making a decision. Switching diets can be harmful to a dog’s stomach, so make the move gradually over several days to keep your pup healthy.

The American Bulldog is a quick, confident, and devoted protector of both his human family and personal property. He is a sweet, attentive, and loving companion, but he is also fearless and ready to strike if an intruder crosses his way.

The American Bulldog is an aggressive, vigorous working dog with a domineering, powerful, and athletic demeanor, with strong muscles and heavy boning. He gets along well with young children, as well as dogs and other pets if he was raised with them from the beginning.

American Bulldogs are amiable, clever, and affectionate, but their affectionate nature frequently causes them to be territorial and wary of outsiders. This makes them excellent family dogs and watchdogs, even for homes with youngsters, although they will require socialization training, particularly as puppies, to get along with unexpected humans or other dogs who come to visit.

Fortunately, their intelligence allows them to be highly adaptive and trainable. The American Bulldog is a dynamic breed with high activity requirements, and they do well in households who can keep them busy with frequent walks and play time.

They are not the ideal breed to keep in apartments or limited settings where they cannot burn off energy. They can become destructive and chew on things they shouldn’t if they aren’t physically or cognitively active.

The majority of the care required for an American Bulldog’s health is addressing their needs for exercise and mental stimulation. Failure to do so can lead to feelings of worry, boredom, and harmful conduct. The rest is very conventional as long as those demands are met.

Maintain regular vet visits, weekly ear checks, monthly nail cutting, and regular dental care. The likelihood of drooling, which is common in bully breeds, is one cause for concern. If you don’t want a lot of slobber all over your house, make sure to wipe your dog down as needed.

Because of his professional history, the American Bulldog is used to being outside, but like other dogs, he prefers to live indoors with his owner. As a result, he should be exercised frequently with plenty of interesting activities to burn off energy and combat boredom while avoiding negative conduct.

Otherwise, the American Bulldog is a low-maintenance breed that requires little more than cleaning up spit and slobber and minimum grooming for his short, fine coat.

American Bulldog Relationship with Children and Other Pets

As with most breeds, socialization training for American Bulldogs should begin at a young age. American Bulldogs are excellent with youngsters and extremely loyal to all members of the family if properly trained.

To avoid incidents, it is also critical to teach youngsters how to properly handle and care for animals. Even if your dog has been adequately trained, you should constantly supervise them while they play with youngsters to ensure that things don’t get out of hand.

Play should be supervised, especially when playing with a large, strong American Bulldog, as smaller dogs might easily get hurt. In general, this breed is sociable, although injuries can occur when they are overly eager to play rough or are unaware of their own strength.

All About  American Bulldog

American Bulldogs are generally happy, family-oriented dogs who thrive in homes with plenty of space to explore.

A large, fenced-in backyard is practically required for one of these lively dogs, however activity requirements vary depending on breed and kind. They may be happy with city living if they receive plenty of walks, and they can even make good jogging or running partners.

They, on the other hand, can not tolerate being left alone for extended periods of time, and they can feel pent up in an apartment. They can get bored and destructive if their physical and mental stimulation needs are not addressed.

American Bulldogs require experienced owners who can be patient with training and begin socialization at a young age. As long as they’re well-trained, they’ll get along nicely with youngsters and other pets, though you should still supervise them as you would any dog.

Whether used for hunting and farm work or simply cuddling with their owners, the American Bulldog makes a superb, loyal friend as well as a skilled watchdog.

Bulldogs were first utilized for bull baiting in the 17th century, a grueling sport in which dogs fought bulls. Bulldogs charmed their way into the hearts of families across England and even became a national symbol when the game was abolished.

Because of their power and drive, English bulldogs were transported to North America to work as farm dogs. Farmers bred them with other agricultural work dogs in order to create the greatest all-around farm labor dog. Because of their intelligence, loyalty, and quickness, they were useful for both herding and hunting.

As the breed evolved, these dogs became more appealing, sociable companion animals that were a must-have for households all over North America. They became mascots for a variety of institutions and organizations, including Georgetown and Yale.

Their frightening appearance and strength make them ideal faces for competitive sports teams. In 1999, the United Kennel Club recognized the American bulldog as a unique breed.

Where to Adopt or Buy an American Bulldog

American bulldog breeders can be found in practically every state across the country. When purchasing a pet from a breeder, always request a health guarantee and any pertinent medical history. Another alternative is to look into breed-specific rescue groups.

The American Bulldog Rescue, based in the Northeastern United States, specializes in finding forever homes for this breed.

What do American bulldogs stand for?

What is the highest an American Bulldog can jump?

Here at pawesomepuppy.com we are always happy to talk to our visitors. Please get in touch either by emailing us Read more

Please be advised pawesomepuppy.com are not veterinarians and we do not have any qualifications in pet care. The information on Read more

pawesomepuppy.com is a participant in the Amazon Services LLC Associates Program, an affiliate advertising program designed to provide a means Read more 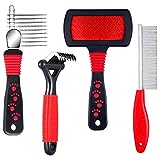