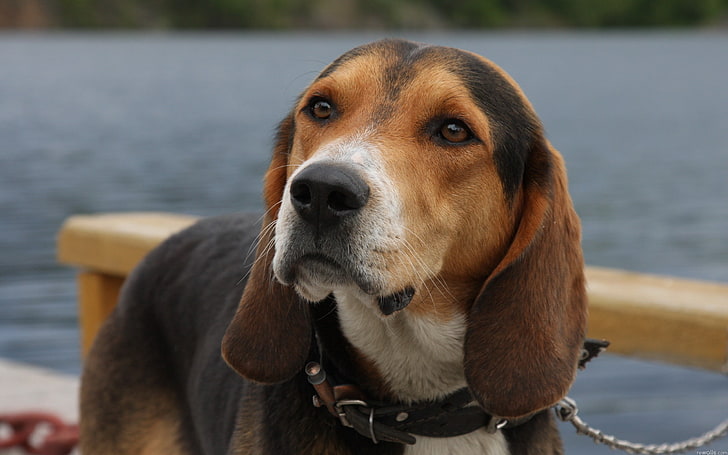 The American English Coonhound, formerly known as the Virginia Hound and adapted to hunt the rugged terrain and wily raccoons of the American colonies, is renowned for his speed and endurance.

He began his career as a dual-purpose dog, hunting foxes during the day and raccoons at night.

He pursues his prey with zeal, roaring out loudly as he hunts, a tendency that carries over into his home life.

This hound is going to bark. On the good side, he is sociable with humans and other dogs.

If you are not planning to hunt him, plan to provide lots of daily activity for this quick and competitive dog in other ways to keep him from becoming frustrated and destructive. He’d make an excellent running companion.

The American English Coonhound is a typically healthy breed. It is still bred largely as a working dog that requires an efficient physical condition.

Breeders that are responsible will examine their stock for hip and elbow dysplasia, as well as eye problems like as progressive retinal atrophy and cataracts.

His ears should be checked on a regular basis to ensure there is no excess wax or debris.

As with other huge and deep-chested breeds, he is susceptible to bloat, a potentially fatal gastrointestinal disease. Owners should get familiar with the symptoms of bloat and what to do if it occurs.

While proper nutrition has an effect on the sheen and texture of your American English Coonhound’s coat from the inside, he will still require regular grooming to be in top condition.

Utilizing a shedding tool or a grooming glove with rubber nubs on a weekly basis will assist in minimizing his shedding. Additionally, this distributes skin oils down the hair shaft, imparting a natural sheen to his coat.

Once a month, cut his nails, and bathe him every four to six weeks to maintain his coat and skin clean and healthy, as well as to eliminate dog odor. His ears should be checked frequently for extra wax or dirt and gently cleaned.

With his strong energy level and natural desire to be a member of a pack, whether human or canine, the American English is a great companion for an energetic runner, cyclist, or hiker.

He needs a great deal of activity to remain fit and happy.

Due to the breed’s high hunting drive, he should never be left unattended in an uncontrolled scenario, as he will be unable to resist the desire to follow an intriguing scent detected by his sensitive nose.

He requires a fenced space in which he is free to run. Chasing a ball around his backyard can be a great way for him to get some exercise.

Adequate early socialization of your American English Coonhound is critical; otherwise, your puppy may develop a need for food or toys in your home.

The secret to a well-adjusted, mentally sound dog is to expose him to a range of different types of humans in a variety of settings and situations.

As is the case with many hounds, English dogs have a double personality: they are tenacious, relentless, and stubborn on the trail, but are charmingly agreeable friends at home.

Nonetheless, the breed’s boundless prey drive and energy, the patience required to teach them for purposes other than coon hunting, and their proclivity for barking in a loud, ringing voice make them best suited to experienced dog owners.

The American English Coonhound should thrive on a high-quality commercial dog diet or one cooked at home (under veterinary supervision).

However, owners of American English Coonhounds should be mindful that working dogs have unique nutritional requirements compared to dogs with more sedentary lifestyles.

These energetic dogs should always have access to fresh, clean water.

As with all breeds, treats should be provided in moderation and their food monitored—coonhounds are particularly prone to weight gain and obesity-related problems.

They enjoy outwitting owners by sniffing out problems. They are cheerful, attentive, affectionate, strong-willed, fun-loving, and mischievous.

Their first love is hunting. They are self-sufficient and frequently follow their nose in search of a smell trail.

They are generally laid-back at home, eager to earn a treat, and fearful of authority, but are readily distracted by scents during training.

These canines thrive in the company of other dogs and get along well with everyone, including small animals if nurtured around them. They serve as enough vigilance.

It’s critical to provide a balanced diet to these hardworking, active dogs—not only to support their sleek and athletic bodies, but also to keep their coats healthy and shining.

Weekly brushing is required due to the breed’s short and strong protective coat (which will also help minimize shedding).

The American English Coonhound is an extremely energetic breed.

Additionally, they thrive when part of a pack, making them great companions for busy families, as they will gladly join their owners for a run, hike, or even bike ride.

Additionally, these pack animals get along well with other pets and children in the home.

However, because they crave constant contact with their people, these are not dogs that should be left alone for extended periods of time.

The American English Coonhound requires an extraordinary amount of activity, but due to their exceptionally strong prey drive, they should never be let to run free or play ball outdoors without the limits of a robust and solid fence.

This breed requires early socialization as puppies, as they are prone to specific behavioral disorders, such as food or toy possessiveness.

The American English Coonhound is occasionally referred to as having a “divided” disposition, since they can be both tough and motivated hunters and pleasant and placid family pets.

The breed’s prey drive and seemingly limitless energy can occasionally obstruct training, since they are not always eager to engage in activities that do not involve raccoon hunting.

Additionally, these dogs are a more “vocal” breed, making them a better match for experienced dog owners.

Though they are capable of a very loud howl, the American English Coonhound is thought to be a little too outgoing and gregarious with strangers to be an efficient watchdog.

American English Coonhound Relationship with Children and Other Pets

American English Coonhounds are affectionate, devoted, and eager to please.

This breed gets along nicely with children of all ages, if they are introduced at a young age. This breed is social as a result of its group background.

The American English Coonhound makes an excellent watchdog due to its loud howl, but because it is so friendly, do not expect it to function well as a guard dog.

When confronted directly, this breed may become defensive. It will defend its family if endangered, but will rarely attack without being provoked.

All About American English Coonhound

These sleek and quick, thin but powerful dogs hunt the cunning raccoon from dusk to daylight.

American English Coonhounds are deep-chested, sweet-faced athletes renowned for their speed and endurance.

A medium-length coat in a variety of designs, some with ticking, is firmly draped around the athletic frame.

The head is large and domed, with soft, low-hanging ears and dark-brown eyes that sparkle with friendliness and tenderness.

When not on duty, American English Coonhounds are placid, but tenacious and stubborn when pursuing their ring-tailed prey.

Their work ethic and energy, the patience required to train them for purposes other than coon hunting, and their loud, ringing bark can make the breed unsuitable for beginner owners as house pets.

According to some ardent supporters of American English Coonhounds, without a sporting outlet for this breed’s hound characteristics, you are simply wasting a good dog.

The American English Coonhound is one of six coonhound breeds recognized by the American Kennel Club (AKC). Frontiersmen raised them for a particular purpose.

These dogs were bred to track and “tree” raccoons—because, indeed, these dogs are specially adapted to climb trees—which early North American settlers learned were an excellent source of food, fur, and fat.

By birth and ancestry, the American English Coonhound is believed to be descended from English Foxhounds imported to America in the 17th and 18th centuries.

The American English Coonhound was created when “backwoods” breeders combined foxhounds with other breeds.

Originally called the English Fox and Coonhound (and briefly the Redtick Coonhound or English Coonhound), the breed was recognized for hunting foxes and raccoons during the day, these canines eventually began to specialize in nocturnal species.

While fox hunting has been a popular hobby in the southern colonies of Great Britain since the late 1600s, George Washington had a special fondness for English-style horse-and-hound fox hunts.

The importation of English Foxhounds during America’s formative years ultimately replenished the gene pool used by colonial breeders to develop the different coonhound breeds found in the United States.

Since colonial times, the breed has remained extremely popular among “coon hunters” and is renowned for its amazing endurance and speed.

Since 1995, the American English Coonhound has been registered with the Foundation Stock Service, and it had its Westminster Kennel Club show debut in 2012.

Where to Adopt or Buy an American English Coonhound

Check with your local animal shelters and rescue organizations to see if any American English Coonhounds are in need of a forever home.

National rescue organizations, such as the American English Coonhound Association, can provide valuable information that can assist you in finding your new best buddy.

When selecting a dog breed, be careful to conduct your research. Consult with other American English Coonhound owners, reputable breeders, and rescue organizations to gain additional knowledge about this breed and its care.

There are numerous dog breeds, and with a little research, you may be certain that you’ll select the perfect dog for your family.

If you’re interested in learning about different coonhound breeds, consider the following:

What are some of the advantages of coonhounds?

Coonhounds are intelligent and affectionate, and they like socializing with humans. When these dogs are hunting, they are untiring and constantly on guard. They make excellent family dogs since they can become extremely friendly once they gain your trust, but supervision is required owing to their high energy level.

Do English Coonhounds in the United States shed?

The American English Coonhound is a relatively easy breed to groom; a weekly brushing with a hound mitt or rubber brush will keep his coat clean and lustrous. He sheds, but if you brush him regularly, you’ll eliminate the dead hair rather than finding it all over the home and on the furniture!

Are English hounds suitable as pets?

These dogs are excellent household pets.