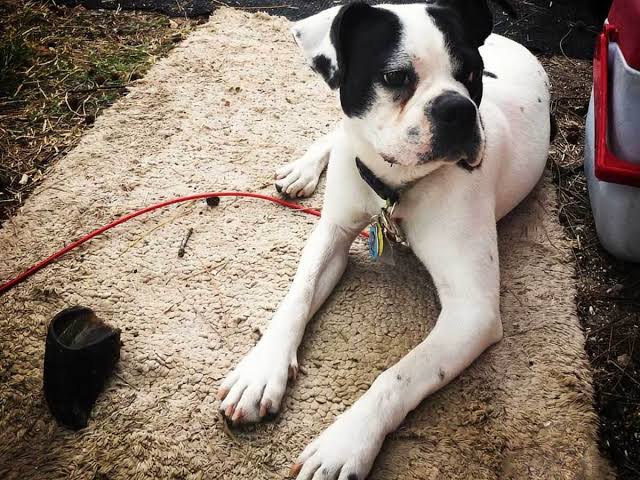 The Boston Boxer is a cross between the Boston Terrier and the Boxer.

As a result, a small-sized dog preserves the Boxer’s appearance in a more compact packaging. It’s well-suited to cramped apartment life and is child-friendly.

Its proportions are similar to those of a regular Boxer, with big eyes. Its forehead is wrinkled and its ears are normal in size.

Although the ears are floppy, they will stand up when excited. Its arched paws, which aid in speed, are a holdover from its primordial hunting days.

Although the American Kennel Club does not accept Boston Boxers as a purebred, they are immensely popular among pet owners worldwide. 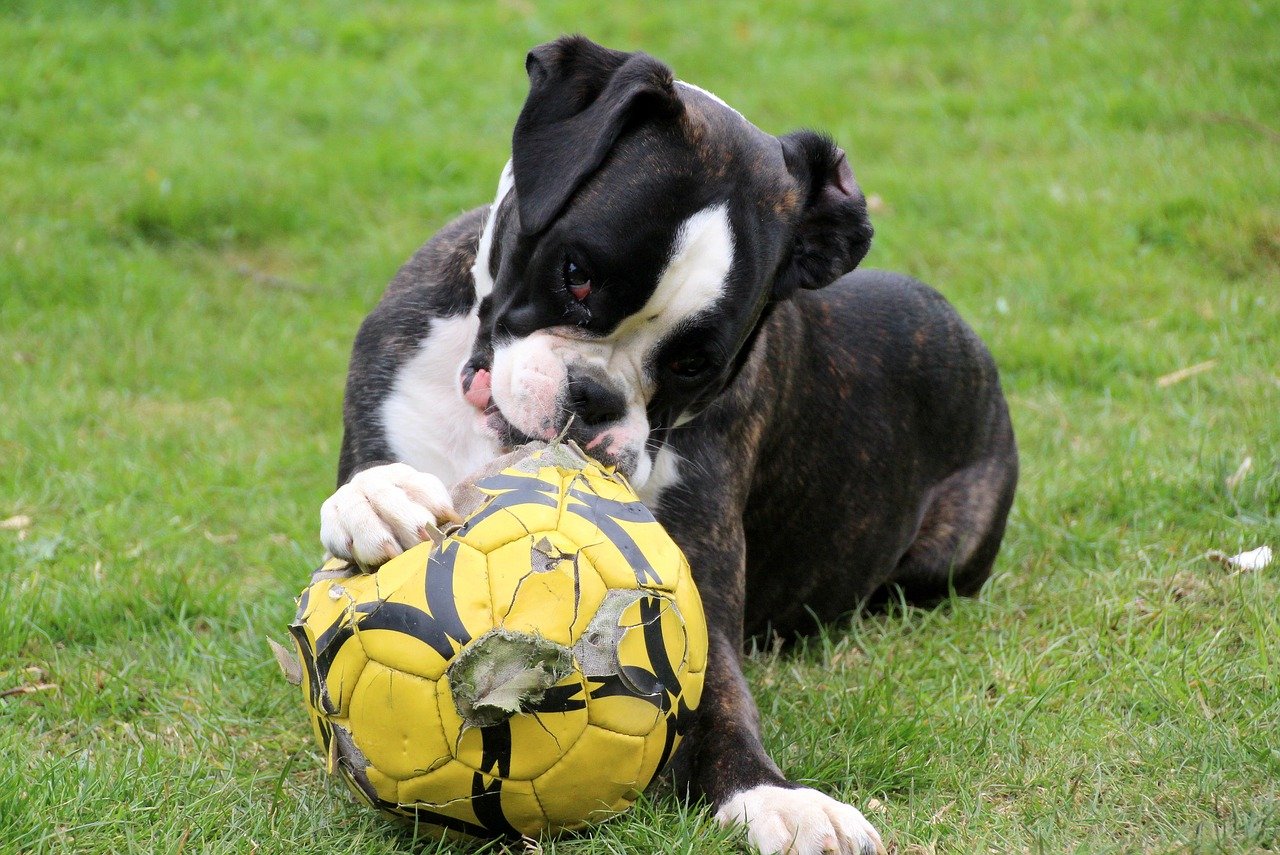 The Boston Boxer is predisposed to several of the same health problems as the Boxer and Boston Terrier.

While the majority are generally healthy, some may be predisposed to a few health problems, which is why proper care and annual veterinary examinations are critical.

Several of the more common health problems that Boston Boxers face include the following:

Boston Boxer coats are frequently a combination of the coats and colors of their Boston Terrier and Boxer parents.

Boston Boxers’ primary colors are black, brown, fawn, blue, and white. Their coats can be solid or multicolored, as in a pied or brindle pattern.

They typically have short coats and are widely regarded as an excellent alternative for allergy patients. The coat of the Boston Boxer is relatively simple to groom.

Weekly brushing and bathing should maintain the coat of your Boston Boxer bright and healthy. Due to their shorter coats, Boston Boxers are not well-suited to harsh weather.

In the winter, your dog will almost certainly require a coat, and in the summer, you may need to apply sunscreen to the ears, nose, and other vulnerable places with less hair coverage.

Boston Boxers are incredibly active dogs who require a great deal of exercise to remain happy and healthy.

Every day, you should expect to take a long walk with your Boston Boxer, and on some days, you may require a second stroll.

If you live in an apartment complex or a densely populated area, it’s critical to know where you can walk your dog before you get one.

Additionally, it’s critical to assess if a dog that requires this much exercise is the perfect fit for you.

When purchasing a Boston Boxer, you may anticipate walking at least eight miles per week spread out over roughly an hour per day, every day, for the next several years.

Boston Boxers are indeed bright enough to learn how to perform tricks and obey directions.

In most circumstances, all you need is patience and a handful of goodies to amaze your Boston Boxer’s mates.

A Boston Boxer diet that is ideal should be designed for a small to medium-sized breed with a high energy level.

They are prone to gain weight if overfed, so maintain a consistent feeding schedule and avoid leaving food out during the day. Make sure to limit their treat intake as well.

As with all dogs, the Boston Boxer’s nutritional requirements fluctuate as they mature into adulthood and continue to do so into their senior years.

You should consult your veterinarian on your Boston Boxer’s food, as there is just too much variety between individual dogs in terms of weight, energy, and health to provide a specific recommendation.

The Mini Boxer might be reserved around strangers, which is why it is critical to socialize your Boston Boxer early on to ensure they are people-friendly.

These dogs are prone to develop an attachment to a single family member and might become rather protective of them.

If you require a devoted watchdog, the Boston Boxer will gladly accept the assignment.

Despite their protective instincts, the majority of Boston Boxer owners describe their dogs as complete goofballs.

Because the Mini Boxer enjoys clowning and entertaining, do not be surprised if yours resorts to hammy acts to capture your attention.

As a highly energetic mixed breed, the Boston Boxer is best suited to persons who can keep up with them.

When left alone over an extended period of time or without stimulation, this energy might materialize in undesirable negative actions.

You should keep up with your Boston Boxer’s routine veterinary exams to spot any health issues early. Your veterinarian can assist you in developing a regimen for caring for your dog that will keep it healthy.

As is the case with other dogs, Boston Boxers are prone to obesity and have a high level of energy.

Assure that your dog has at least one nice half-hour to hour-long walk each day, interspersed with some good, energetic play sessions and shorter walks.

This will also aid in the prevention of undesirable negative boredom patterns.

Daily check their ears for debris and parasites and clean them as directed by your veterinarian. Trim your dog’s nails regularly, usually once or twice a month.

They should not make contact with the floor. Your groomer can assist you in this.

You should wash their teeth at least once a day. Your veterinarian can advise you on the correct tooth brushing technique for your dog.

This is particularly important if your Boston Boxer is a smaller breed, as tiny breeds are more prone to dental problems.

Boston Boxer Relationship with Children and Other Pets

Due to the size variation of the Boston Boxer, smaller Boston Boxers, affectionately known as Mini Boxers, are prone to injury from overly exuberant children.

Nonetheless, the Boston Boxer is an amiable and fun-loving breed that is well-suited for households with children.

It is critical for any youngsters who engage with your Boston Boxer to learn how to approach and play with a little to medium-sized dog responsibly.

When talking about other pets, Boston Boxers get along well with other animals if introduced gradually and calmly, and early socialization helps this process go well.

It is preferable if these canines become accustomed to other pets early on.

Again, due to their playful nature, they do get along with other animals when introduced in a quiet and regulated environment. It comes down to training, socializing, and good fortune.

All About Boston Boxer

The Boston Boxer is known as a cross between the Boston Terrier and the Boxer. As a result, a small-sized dog preserves the Boxer’s appearance in a more compact packaging.

It’s well-suited to cramped apartment life and is child-friendly.The Boston Boxer is a playful and lively breed.

They are athletic, capable of running quickly and leaping relatively high, and can keep a brisk pace for extended periods of play without tiring.

They develop an attachment to and protectiveness for their owners rapidly and are apprehensive of strangers who may provoke them to become angry and bark.

They do, however, get along well with other household pets and small yard animals such as rabbits and squirrels.

Boston Boxers make excellent household dogs. They are extremely sociable, vivacious, and playful. These canines get along well with other dogs and cats.

They enjoy playing with children and will provide endless pleasure for one another.

Boston Boxers are intelligent enough to obey commands and act appropriately, and they will even learn tricks and guard your home while you are away.

While the Boston Boxer mixed dog breed may have developed spontaneously over time, designer breeders began deliberately combining Boston Terriers and Boxers in the late 1990s, most likely in North America.

Breeders aimed to combine the two parent breeds in order to retain the Boxer’s friendly and lively demeanor but in a more manageable Boston Terrier size.

As demand for mixed breed puppies increased, they continued to breed Boston Boxers.

Despite the fact that the Boston Boxer originated as a designer breed, some have ended up in shelters or the care of rescue organizations.

If you feel the Boston Boxer is the dog for you, consider adoption.

Check with your local shelters, search for Boston Boxer or Miniature Boxer rescues, or contact breed-specific Boxer or Boston Terrier rescues, since they occasionally accept mixed breed dogs and place them.

Where to Adopt Boston Boxer:

Because Boston Boxers are a mixed breed, it may be difficult to locate a breed-specific rescue.

However, you may wish to contact Boston Terrier or Boxer breed-specific rescue organizations, as they frequently accept mixed breeds.

If you want to adopt a similar breed, consider taking time in the pros and cons of this breeds:

What is a Boston Boxer?

The Boston Boxer is a mixed breed dog–a cross between the Boston Terrier and Boxer dog breeds.

What is a small Boston Boxer called?

Your Miniature Boxer hybrid is a mix of the Boston Terrier and the Boxer and can take on the temperament and personality traits of one or both of the parent breeds.