The Black Norwegian Elkhound is a Spitz breed with a short compact body, dark eyes, straight ears, and a curled tail draped over the back.

It has a thick coat that blends in with the body. This is an all-weather hunting dog, which means that the coat is critical.

It must be able to withstand the strong autumn rains in Scandinavia and the freezing temperatures, which it does admirably.

The Black Norwegian Elkhound is an extremely robust and resilient breed of dog: highly vigilant, powerful, and proud. It possesses a stronger will than the Grey Elkhound.

The most suggested technique of training is one that emphasizes motivation, such as clicker training or reward-based systems.

Using punitive or dominance-based tactics may have a detrimental effect on teaching the Black Norwegian Elkhound. It is simple to train, but requires constant activity to be joyful.

To perform successfully, it requires constant exercise and activity in conjunction with its superior intelligence. It is a superb hunter and enjoys being in the woods. 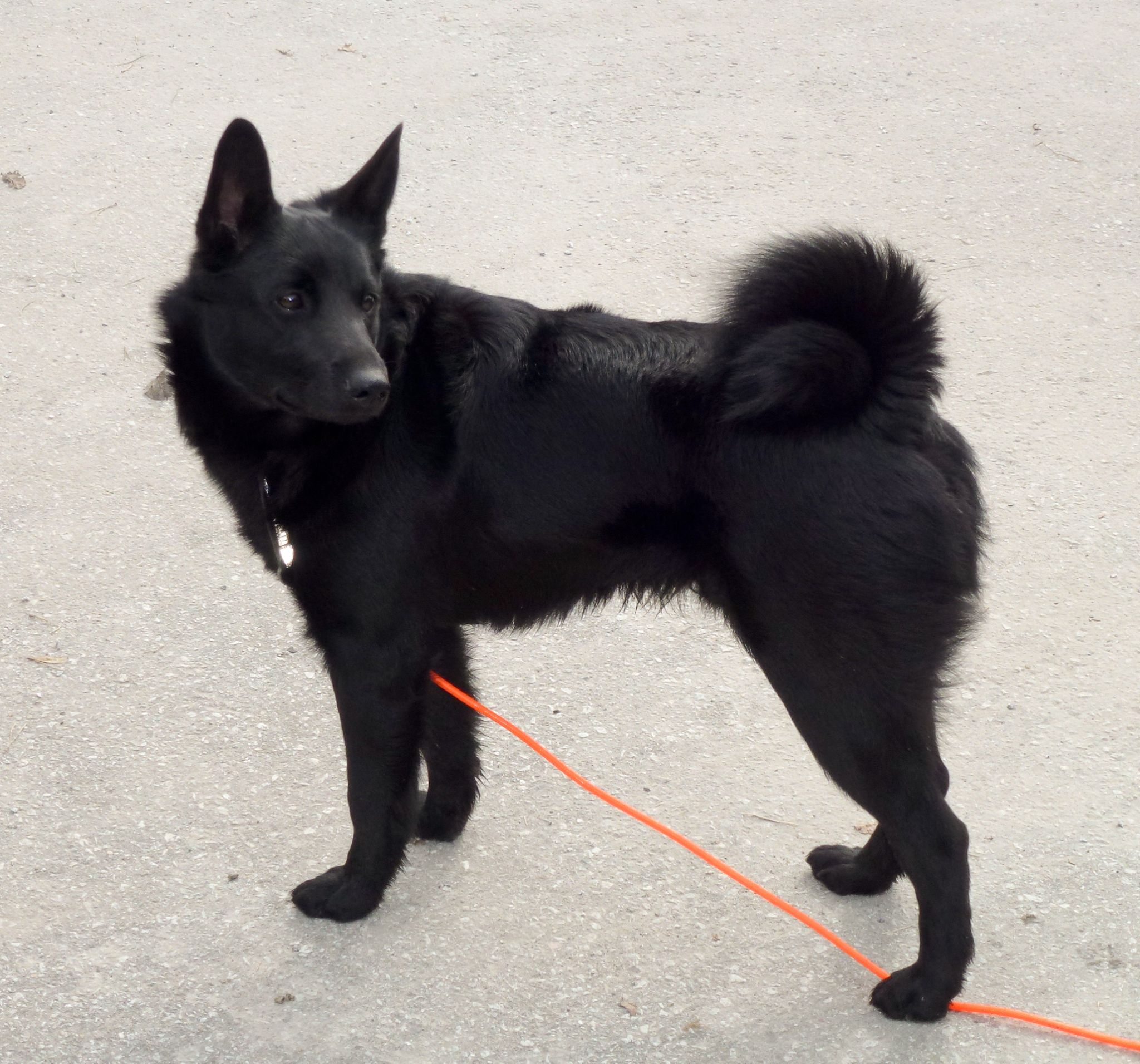 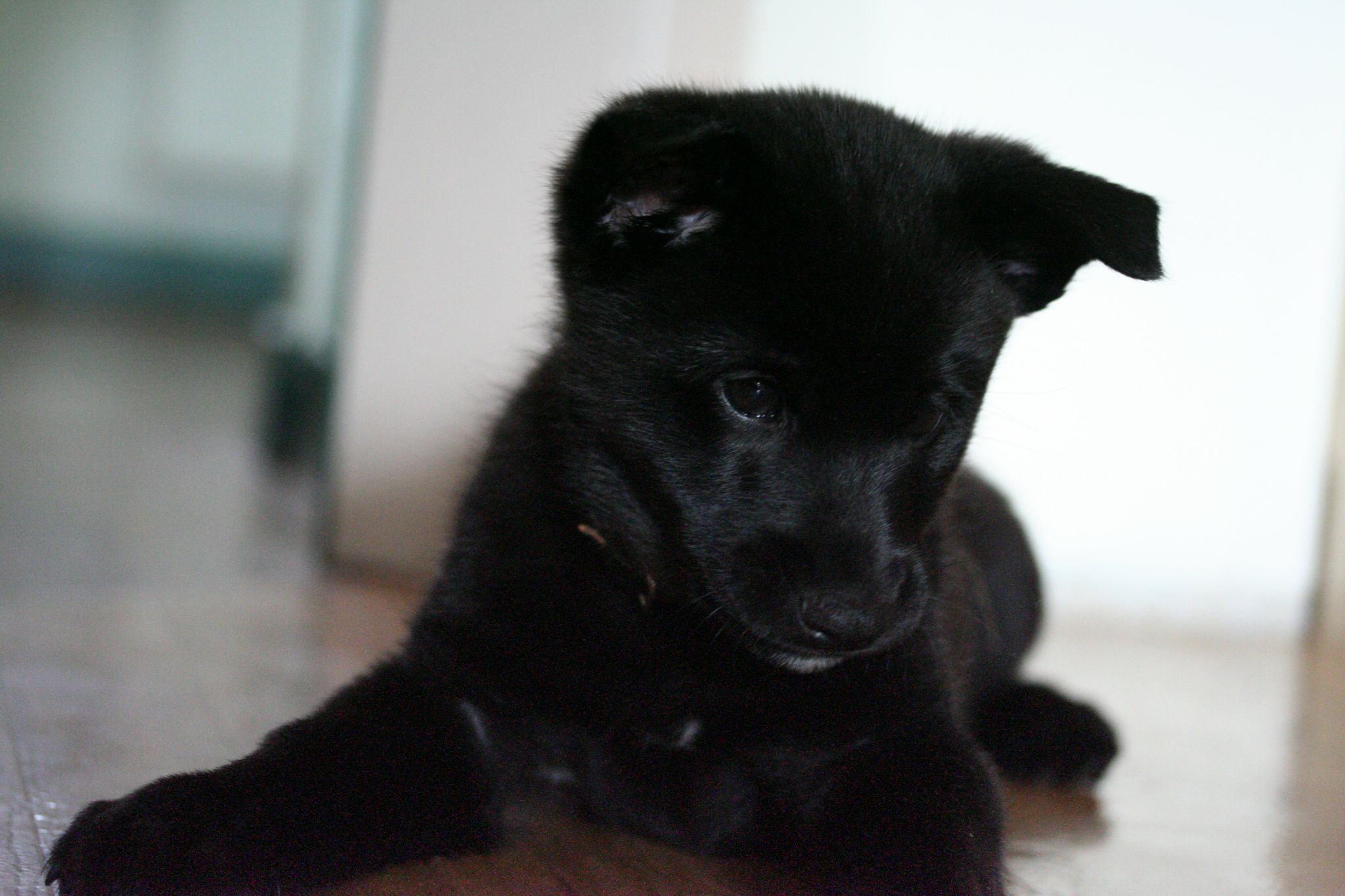 With 12 to 15 years, these are a long-lived breed with a high standard of health.

However, there are a few health problems that the Black Norwegian Elkhound is more prone to develop, including the following:

This is a degenerative disorder affecting the hip joints that are frequently found in medium to large size dogs. Hip dysplasia results in osteoarthritis and persistent pain, which progressively increases as the dog ages. To combat this devastating condition, selective breeding within the population should be used.

Recently, it was established that certain dogs are genetically predisposed to fat, and one has to ask if the Black Norwegian Elkhound is one of these canines. If given a chance, they will overheat and have a natural tendency to gain weight.

While the additional fat stores may aid them when they are outside during the harsh Scandinavian winters, Elkhounds maintained as pets in a home mustn’t grow overweight. Due to their nose’s superior ability to detect food, owners must exercise caution both inside and outside the home.

Thyroid Hypothyroidism is a hormonal disorder in which the body produces insufficient thyroid hormone, resulting in a sluggish metabolism. In general, affected dogs will have poor coat conditions, are prone to infections, and have difficulty losing weight. A lifetime of medicine may be necessary to maintain effective control of the disease.

This eye illness is debilitating for dogs, as it finally results in blindness. It is critical that no sick dog gets bred, as this is a well-known genetic condition.

This uncommon disorder results in the kidneys losing a range of vital chemicals such as proteins and salts. Affected canines’ lifespans will be reduced.

Brushing their thick coat several times a week, or daily during a heavy shed, is recommended.

Their coat is waterproof, and if this characteristic is to be kept, they should not be over-bathed.

Many owners report that their Elkhound’s fur does not smell ‘doggy,’ and bathing to remove odors is frequently unnecessary.

This is an active and intelligent working breed of canine that is constantly on the lookout for work.

Much more so than their grey-colored siblings, these dogs are also agile, durable, and ready for anything, especially in cold weather.

They are not just great big game hunters; they are also highly capable as small game hunters, herding dogs, and even sled dogs.

They are designed for cold temperatures rather than heat, thus caution should be exercised to avoid heat exhaustion in hotter climes.

Often regarded as independent, Black Norwegian Elkhounds are known to roam, and they require a strong leader who can overcome their natural reluctance throughout training.

They must not be permitted to get away with inappropriate behavior, and consistency is critical. A forceful, yet kind approach frequently results in a favorable response.

Positive reinforcement training is significantly more effective than punishment-based instruction, which they would despise.

How much food a mature dog consumes is determined by its size, age, structure, metabolism, and degree of activity.

Dogs, like people, are individuals, and they do not all require the same amount of food.

Dogs of the Black Norwegian Elkhound breed are medium-sized. As a result, their diet should be designed for a medium-sized breed with moderate to vigorous exercise requirements.

Consult a veterinarian in your region for more specific recommendations.

The Black Norwegian Elkhound is known as an active dog that thrives in the outdoors, especially in colder climates.

While this breed develops strong bonds with their family, and while all interactions between dogs and children should be closely supervised, they are typically extremely tolerant of youngsters as well.

They can be territorial and vocal about it, much more so than the grey variety of the Norwegian Elkhound, which means they are not ideal roommates in tight places and are frequently quite confrontational with other canines.

For certain Black Norwegian Elkhounds, a fence may be more of a suggestion, and their strong hunting instincts may frequently encourage them to leave the yard in chase of fast moving objects, therefore a tall, solid barrier and supervision may be necessary to keep your dog from wandering.

This is a relatively easy breed to train if positive reinforcement is employed, yet harsh training may result in increased aggressive behavior from these dogs.

It is a highly active dog that thrives on physical activities. They require regular exercise in the form of a long, quick walk or jog.

While out on a walk, the dog must be brought to heel alongside or behind the person carrying the lead, as a dog’s thinking believes that the leader leads the way, and that leader must be a human.

Black Norwegian Elkhound dogs should be exercised for at least an hour per day. These dogs will also like jogging beside your bike or on a long run through the woods, but keep in mind that they adore roaming.

Indoors, the breed is fairly active and thrives with at least a large yard. Additionally, they favor cooler conditions.

Black Norwegian Elkhound Relationship with Children and Other Pets

All About Black Norwegian Elkhound

It is a little spitz breed that is extremely rare outside of Scandinavia’s Nordic countries.

It is a significantly younger breed, having been developed in Norway during the early nineteenth century.

The FCI classifies it as a hunting dog, but it is also employed as a watchdog, security dog, and herder.

The AKC breed name “Elkhound” is derived straight from the Norwegian word “Elghund,” which translates as “elk dog” or “moose dog.“

In Norwegian, the term “elg” refers to the animal known in English as a “elk” or “moose,” while “hund” denotes “dog.”

Their chests are broad and deep. Straight from the front, the legs show. Modest and compact with robust pads, the oval paws are small and compact.

On the front legs, dewclaws are frequently present, but not on the hind legs. The coat is all black, with only a trace of white on the chest.

The breed has a dense coat that blends in with the body. This is an all-weather hunting dog, which means that the coat is critical.

It must be able to withstand the strong autumn rains in Scandinavia and the freezing temperatures, which it does admirably.

The Black Norwegian Elkhound developed in Scandinavia and is one of the most ancient breeds; it dates back to the Stone Age and is thousands of years old.

A skeleton comparable to today’s Black Norwegian Elkhound was discovered between 4000 and 5000 BC. To put it in context, these dogs have existed since humans hunted with slingshots and lived in caves.

The Vikings used them as hunting and security dogs. The dogs were employed to track moose, elk, bear, mountain lion, badger, lynx, wolf, reindeer, and rabbit.

The dogs would trail the quarry and inform the hunter with their barks, effectively deterring the animal until the hunter arrived. Norwegian Elkhounds can detect games from a distance of over a mile.

The dogs performed better at night than during the day. Additionally, the breed is highly regarded as a sled dog.

The Norwegian Defense Minister has the authority to mobilize all privately owned Elkhounds in the event of a conflict.

In more recent times, the Elkhounds pleasant and dependable demeanor has helped it earn a place as a valued family pet in many families.

The term “Elkhound” is a straight translation of the Norwegian word “Elghund,” which translates as “moose dog.” In Norwegian, “elg” and “hund ” refer to moose and dog, respectively.

Hunting, tracking, herding, watchdog, guarding, sledding, and agility are just a few of the Elkhound’s abilities.

Where to Adopt Black Norwegian Elkhound:

Always conduct study before adding a new animal to your household.

It’s a good idea to speak with both existing owners and breed groups about a breed, and this is especially true for breeds like the Black Norwegian Elkhound, which do demand additional activity and attention.

If you’re interested in rescuing and adopting a Black Mouth Cur, you can visit this website, which lists available Black Norwegian Elkhound by state, or you can visit our adoption page, which allows you to search for any breed of dog by zip code and breed.

The Black Norwegian Elkhound is a miniature Spitz breed recognized as a hunting dog by the FCI. It is quite rare outside of Scandinavia’s Nordic countries.

It is very rare outside the Nordic countries of Scandinavia. It is bred for the same purpose as the Grey Norwegian Elkhound but is smaller, more agile, and easier to recognize in the snow.