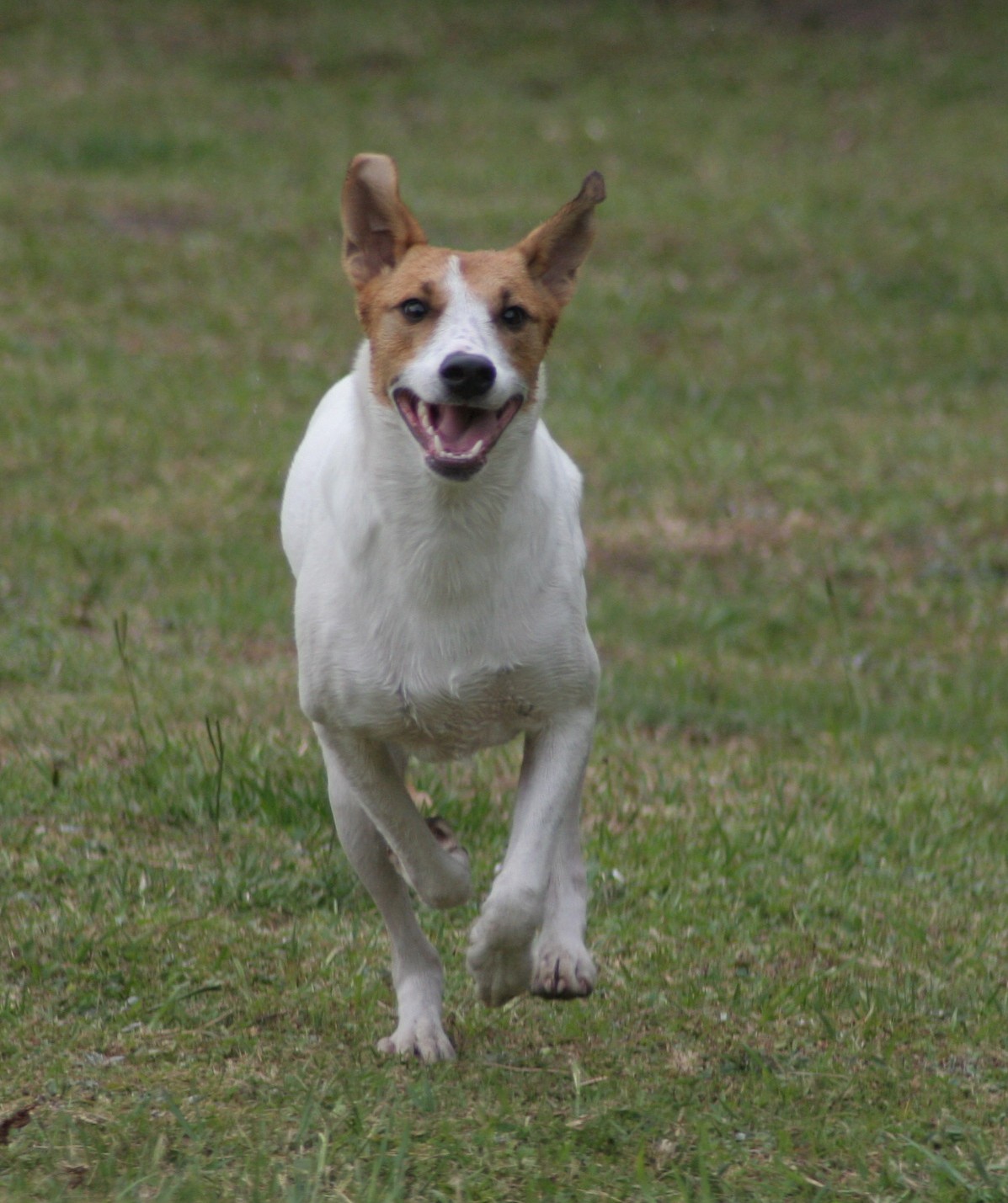 Africanis Dog is known as a medium-sized dog with a short coat that is well-muscled and slightly longer than tall. It can be any color and is sometimes accompanied by a ridgeback.

Additionally, there is a wire-haired variant of the breed, but it is extremely uncommon. Typically, the height ranges between 50 and 60 centimeters (with a margin of 2–3 centimeters).

The Africanis is a well-behaved dog who is not overbearing: a sociable dog who exhibits attentive territorial behavior. Although the breed is self-sufficient and territorial, it is extremely trainable.

They can, however, become surly as they age and can also be rather challenging when kept in a group with other dogs.

The Africanis is one of the healthiest dog breeds known due to its survival of the fittest evolution.

The Africanis does not require pampering or special food; it is superbly adapted to survive and grow in harsh environments with little nutrition.

Hundreds of years of evolution and genetic diversity have contributed to the development of a breed that is devoid of congenital problems common in today’s purebred dogs; its immune system has even evolved to the point of assisting in the resistance to internal and external parasites.

These dogs have acquired a natural resistance to a variety of internal and external parasites and should be bathed only as needed, as excessive bathing will destroy natural oils from the dog’s coat, making it more sensitive to environmental risks.

Brushing this dog once or twice a week with a slicker or gentle bristle brush, or wiping them down with a wet towel, will assist in removing loose hair and maintaining a healthy, glossy coat.

Regularly inspect the ears of the Africanis dog to ensure they are clean, dry, and free of dirt or infection. Pre-existing conditions are not covered by the majority of pet insurance carriers.

Insure your pet immediately to minimize worry and excessive veterinary care costs. Secure pet health insurance today to avoid exorbitant veterinarian care costs and save up to $273 per year.

Africanis have an abundance of stamina and energy and require at least an hour to an hour and a half of strenuous activity per day.

While lengthy walks and treks are desirable, these dogs thrive when given frequent opportunities to stretch their legs and run.

They may be well-suited to activities such as rally sport training or freestyle dance, and while skijoring may be too cold for these warm-weather dogs, a high-powered activity such as bike-jor may help them burn off some of their excess energy.

Although these dogs can adjust to an apartment-style living with sufficient additional exercise, they are generally happier with greater space.

Positive reinforcement is the best technique to train your Africanis, providing praise and favorable support is extremely helpful.

Training an Africanis 3 – 5 times a day for 5 minute sessions guarantees you are getting their full attention. It is more efficient to train them with frequent but short sessions throughout the day.

Training an Africanis, your voice tone is your biggest help, applauding utilize pleased tone and stating “No” in a firm tone but make sure you’re not shouting.

Make sure to train the dog from pup stage, to be social to people and other dogs alike because they pronounced a territorial behavior.

Africanis is an energetic, athletic breed type, and will thus need food that contains animal proteins and carbohydrates for energy, vitamins and minerals for digestive and immune health, and omega fatty acids for coat and skin wellness.

The recommended food choice for Africanis dogs is premium dry food, as it contains balanced portions of nutrients an Africanis will need to stay healthy in the long term.

Though not much info exists about the Africanis diet, a dog of this size, activity level, and demeanor will thrive best on premium dry food, because this food type contains balanced portions of the above-listed ingredients.

Africanis are clever dogs with a kind disposition. Their inherent hunting instincts and devotion to their master and his land make them excellent guard dogs who are not unduly violent.

This is a dog that has walked freely around humans in and around rural settlements for millennia.

This has developed a need among the Africanis for both space and human contact.

Although the Africanis is inherently independent, it typically responds well to training, making them excellent pets that are safe to have around the house.

Physically, Africanis puppies grow rapidly in height and length for the first 6-8 months (often with a major growth spurt at about 5-7 months), then those growth rates slow somewhat while the adolescent “fills out” by gaining muscle mass and fat; an Africanis is usually at or near its full adult size (an average of 22 inches at the shoulders in height and 75 pounds in weight) at 12-14 months of age.

Socially, Africanis pups develop steadily: they reach adolescence at about six months, sexual maturity at 10-11 months, and full mental maturity at about 16 months.

Africanis Relationship with Children and Other Pets

While all encounters between canines and children should be controlled, Africanis dogs are very patient and playful with youngsters and can generally be relied upon to be kind.

They are normally friendly toward other dogs, and while they are vigilant and will alert you to any incursion, they are not aggressive canines unless their family is directly threatened.

These dogs are self-sufficient thinkers capable of devising novel solutions to their issues, and if not provided with sufficient mental stimulation, may invent new ones, such as how to get to the steak you had planned for supper.

Fortunately, they are also quite bright and eager to please, which means they may be easily educated using positive reinforcement methods.

A basic type of landrace dog is widespread throughout Africa.

There are regional variances within this broad grouping, believed to be the effect of seclusion and, to a lesser extent, deliberate breeding.

These canines, which are located in Southern Africa, have been given the name “Africanis.” According to some contemporary writers, the Africanis is a pariah dog.

This is deemed an erroneous classification, as the term is normally used to refer to an ownerless, free-ranging dog.

Considered a landrace due to their low human breeding interference, the Africanis have also been preserved by human owners.

The Africanis is a medium-sized, well-balanced dog with a long, narrow nose and a typically short coat. It has been compared to a Greyhound crossed with a Dingo.

It comes in practically any color or mix of colors, but fawns, browns, brindles, and blacks with varied white markings are the most prevalent.

A distinguishing, potentially primitive feature is a black patch located high on the outside of the tail, near the wild wolf’s caudal gland.

Africanis is typically between 50 and 62 centimeters tall (20 and 24 in). Due to the fact that this is a landrace, small differences in appearance are possible.

Despite this, the Africanis is reported to breed true to an identifiable form.

Africa’s indigenous canines may be descended from ancient Egyptian dogs discovered around 5,900 years ago in the Nile Delta.

The descendants of these canines are believed to have spread throughout Africa via tribal movements, initially across the Sahara and eventually reaching Southern Africa in the sixth century AD.

The dogs could have aided in the herding of sheep, goats, and calves, as well as guarding against predators and assisting their human companions in the hunt.

The Africanis has been referred to by a variety of different names.

These include the Bantu dog, known in Kiswahili as mbwa wa ki-shenzi (“traditional dog”), the Hottentot hunting dog, the Khoekhoe dog, and the Tswana and the Zulu dog. Sica, Isiqha, Ixhalaga, Ixalagha, Isigola, I-Twina, and Itiwina are further indigenous names.

While European settlers often despised the Africanis in favor of their imported dog breeds, the Africanis were regarded in better regard by Europeans in Africa than the Indian pye-dog was in India.

Recent attempts have been made to protect, preserve, and promote these canines, preventing them from being divided into a variety of distinct breeds based on their physical characteristics.

In December 2006, an organization called African Tails was born. It is set on the dusty streets of Du Noon and Joe Slovo townships in Cape Town, where African Tails strives to curb the over-population and suffering of abused and neglected township dogs.

If you want a dog which is perfectly adapted to climate, generally issue free, and a wonderful companion, protector, and friend, then adopt an Africanis or Africanis-mix dog.

African Tails can help you in adopting Africanis because they are the home of this dog breed.

How big does an Africanis dog get?

The Africanis usually stands between 50 and 62 centimetres (20 and 24 in). Being a landrace, minor variations in appearance may be common.

According to Africanis dog experts, Africanis dogs score out of 5 in a scale of the dog breeds that bark a lot. The Africanis barks occasionally against other dog breeds.